Cake of the Damned...Mmm Canada 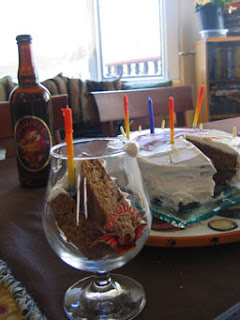 Solstice birthday boy (my husband) celebrates his 42nd today. He was more than happy to lend the occasion to this month's Sugar High Friday themed Mmm...Canada, hosted by Jennifer of the Domestic Goddess.

What's yummy and Canadian for us comes from 2006 when the Quebecois Revels show came to the stage. Three weeks before the show's closing cast party, my husband (he does the show every year) sent off a message to the makers of Maudite, a Canadian beer.

It was one one of those longshot fundraising requests that get sent hoping for a magical windfall. His plea was not only the show's French Canadian theme, but also the infamous flying canoe scene which portrayed the legend of the Chasse-Galerie (the legend of the Flying Canoe). Legend has it that a group of lumberjacks struck a deal with the devil to fly home in their canoes, guided by Satan himself, to make it home in time for Christmas. The canoe is also the logo on the Maudite beer bottle. The company was happy to oblige and 3 cases arrived in time for the cast party.

I made one substitution to birth the Cake of the Damned, or Maudite Cake, in honor of them. I'm not a huge beer fan but hey, my birthday's not until next month! Maudite means "the damned." And we are all subject to that damned process of aging. So best do it with rampant abandon, in the arms of Diabolos and with ginger and buttercream on our tongues. 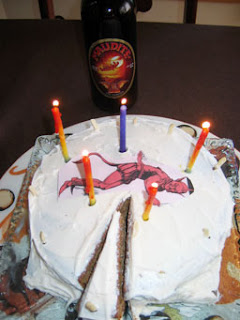 To make it especially damned for me personally, I actually followed the instructions in the recipe that called for a mix. Yes, a mix. A boxed creation of Goddess knows what poured in a bowl with some paltry liquid like water and egg added.

And I was well-rewarded (in damnation) for my leap of faith. The cake was dry, bland and generally below average tasting even though we bought canned cream cheese frosting from the store (the original icing I tried and my butter curdled because of the heat wave we are having).

I used an organic mix that Whole Paycheck, ahem...Whole Foods was happy to oblige in providing. Kudos to them for also selling these incredibly cute little Maudite devil glasses.

So here's the recipe for Gingerbread Cake with Stout Buttercream. The only substitution is the Maudite. I highly recommend that you make the cake from scratch and when you do the icing, use butter that is not more than an hour out of the fridge if it's a hot day. 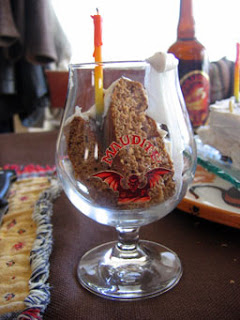 P.S. One of the intriguing gifts our friends offered up for a celebration of his birthday last night was The Sex Life of Food- and I thought this was an interested audience. If I ever have time to read a book again, it's on my list.
Labels: aging birthday damned desserts ginger Maudite beer Mmm...Canada Sugar High Friday