I issued a challenge for Sugar High Friday and 5 brave souls answered it! This month's Sugar High Friday was an invitation to re-create a past dessert failure. Or, to revisit a dessert recipe, ingredient or dessert genre that had bad memories or a past failure associated with it. 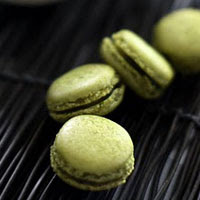 From Australia, Cathy X. who writes Aficionado-X led the charge by sharing Green Tea Macarons. Her vision: to overthrow the notion of macarons being notoriously difficult to make, I'm sharing a recipe that rids the need for conventional Italian meringue once and for all. It's based on the very first method which I was taught and have adjusted a little here and there since.

Solange from Europe who writes Pebblesoup conquered cakes that didn't rise and that were moist in the middle. Her new creation: Jam Filled Cakes. She says, "I have never been able to make cakes properly so thanks for spurring me on--possibly I would have always thought that when it worked it was a miracle. Now I know it is a matter of using the right ingredients and timing." 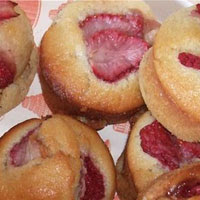 Victoria from Singapore who writes Sweets by Vicky tackled comfort-food superstar: Banana Cream Pie. In particular she addressed the challenge of how to make a good Gluten-free crust. She says, "Banana cream pie is supposed to be comforting, but making pie crust is one scary feat! Gluten-free pie crust has a bad rep so I tried to turn it around. Sad to say 'Operation Pie Crust' wasn't too successful but hey, I tried!" 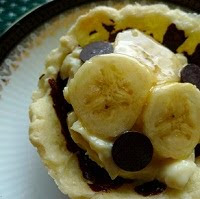 Mansi from California in the US who writes Fun and Food Cafe worked with chocolate- it really does require some dessert chops! She shares with us Rich and Decadent Cocoa Brownies. She says, "This recipe comes from a colleague's wife, who is a great baker. I used to shy away from making these brownies as I could never get them to be as good as hers, despite all that cocoa and butter that goes inside!

But with a strong desire to tame this demon and perfect the recipe, I gave it one more shot, this time with a few changes and some help from Alice Medrich, they turned out perfect! Soft and airy, just like a cake, yet loaded with cocoa flavor which is not the same as eating a chocolate cake, these ultimate Cocoa Brownies promise to be a hit at potlucks and parties!" 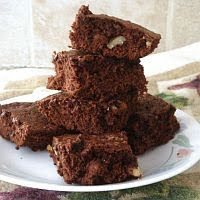 I set out to tackle egg whites and meringues with the help of a friend. Sweet Potato and Lemon Ice Cream housed in Cinnamon Meringues. I got an adventure in whole-family dessert making, as well as lots of tips from a superstar husband and wife team who are masters in the kitchen. 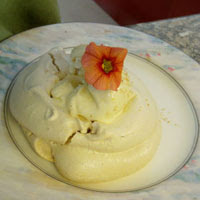