Annual Turn of the Wheel 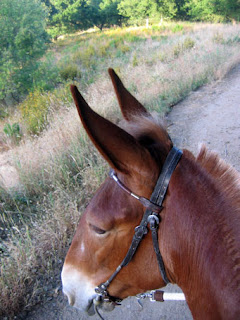 After 5 months off, I took my first ride on Pippi. Thanks to the wholly unromantic and yet wonderous technique of perineal massage and a fab partner in child birthing and rearing crime, I was ready (and longing) for this ride 4 weeks after having Kidlet. 8 weeks later, both she and the Scheduling Goddess gave their blessing.

The Pipster greeted me affectionately but proceeded to show me the usual antics in saddling - just so I would know she hadn’t changed. But we had a good ride on the trail and she was not (that I could tell) in heat- thank you sweet Baby Jesus.

How things change and yet how they come around again to repeat the same patterns. The time to attune to things like this are indeed more precious than ever. The East Bay hills are a parched gold with evergreens in the grooves. Several things in the bushes for Pip are "suspicious" as we ride by. We share a slight nervousness after so many months without each other. An owner talks to her horse, asking him to move aside as she’s cleaning his stall- as if she’s addressing a child. A random guitar chord wafts out of the barn lobby.

1. Midwives. They catch miracles you know.

2. Animals that bond with people, despite our many transgressions against them in the world.


3. My husband especially--but also men that embrace fatherhood- being able to do it all right alongside your wife/partner is not just cool, it confounds the older generation and makes their jaws drop on the floor. And with their jaws on the floor, that's less "well the way it used to be in our day" hot air you have to endure. ;)


4. The community of people and family members around us both near and far. They are teaching me by simply being present in the ways they are able to and doing what comes naturally to each of them.